The Beacons of the Universe

Keep piling on more weight, and at some point the electrons (Electron: A tiny particle usually found swirling around an atomic nucleus (Nucleus: The central part of an atom, which contains Neutrons and Protons. Electrons are usually found around the Nucleus. Strictly speaking, this is the only part of an atom involved in Nuclear Reactions (Fission or Fusion). )}), the electron carries the standard unit of negative charge, which balances the positive charges in a nucleus. The interaction between electrons and nuclei is responsible for chemistry. Electrons can become detached from the nucleus, when given enough energy, and become free. Electrons are members of the particle class called fermions (Fermion: A type of particle with "odd half-integral angular momentum" — a spin (Spin: An intrinsic property of particles. (That is, a property which does not change. Mass and electric charge are examples of intrinsic properties.) Spin is related to the usual notion of spin, though it is a little more difficult to understand. Spin comes in units of 1/2, so that a particle may have a spin of 0, 1/2, 1, 3/2, and so on. A particle's spin determines whether it is a Fermion or a Boson.) of 1/2, 3/2, etc. Spin refers to an intrinsic quality of all particles. Examples of fermions are electrons, neutrons, and protons. The other type of particle is the boson. ), and are roughly 2,000 times lighter than neutrons and protons. ) and protons in a white dwarf (White Dwarf: A type of star which is very old, having cooled off and stopped nuclear fusion reactions. A white dwarf is supported by "electron degeneracy pressure" (no two electrons can be in the same place at the same time). These are produced when a star is not heavy enough to turn into a Neutron Star or a Black Hole. )})|white dwarves}) are crushed together and neutralize each other. The star turns into one big soup of neutrons. The gravity keeps pulling down, as before, pushing the neutrons closer together than they could ever get with the electrons and protons around.

This is where Nature's trickiness comes in. The neutrons also belong to the special category of particles called fermions. Like white dwarfs, neutron (Neutron: One of the particles in an atomic nucleus. These particles have no electric charge, but they hold together the protons (positive particles in a nucleus), and account for roughly half of the particles in the nucleus. Neutrons are fermions, and are believed to form the majority of the matter in a neutron star.) stars (Neutron Star: A type of star which is very old, having cooled off and stopped nuclear fusion reactions. When gravity pulls the star down on itself, the electrons and protons are squeezed together, leaving just neutrons. The star is then supported against gravity by "neutron degeneracy pressure" (no two neutrons can be in the same place at the same time). These are produced when a star is too heavy to be a white dwarf, but not heavy enough to turn into a Black Hole. ) weigh about as much as our Sun, but they are packed into spheres that are just a few miles across. Imagine all the matter in the Sun — about 500,000 times as much as is in the Earth—being packed into a ball that could fit comfortably inside the Grand Canyon! This is 100,000,000,000,000 (one hundred million million) times as dense as lead.

With all this density, the gravity around a neutron star (Neutron Star: A type of star which is very old, having cooled off and stopped nuclear fusion reactions. When gravity pulls the star down on itself, the electrons and protons are squeezed together, leaving just neutrons. The star is then supported against gravity by "neutron degeneracy pressure" (no two neutrons can be in the same place at the same time). These are produced when a star is too heavy to be a white dwarf, but not heavy enough to turn into a Black Hole. ) is much more intense than anything we on Earth will ever experience — just like in the case of the white dwarf, but worse. If you were separated at birth from a twin who went to live on the surface of a neutron star, by the time you reach 75 years old, your twin would only be 60 years old. (Of course, life on a neutron star is far worse than on a white dwarf, even.) In fact, gravity is so strong that not only the warping of time, but also the warping of space is noticeable. To visualize this warping, we take another disc slicing through the center of our star. But circles on the disc don't obey our high-school geometry rules. This disc that we cut straight through the star acts as though it is a hill, just like the one shown below.

The dark ring shown in the picture represents the surface of the star. Take a rope reaching from the center of the star to its surface. If high-school geometry worked in this case, the circle would be about 6.2832 times as long as the rope. It turns out, however, that the circle is much smaller than that. That is the weirdness of warped space.

The picture above shows a perfectly round neutron star — it is the same, no matter which angle you choose to look at it. But this is not necessarily how stars found in the Universe actually are. Neutron stars are very complicated objects. For example, they are believed to have solid crusts — like the Earth's solid rock floating over the liquid magma inside. Just as there are mountains on the Earth, we can expect to find mountains on a neutron star. In that case, the star won't look the same from any angle. If we look at our disc now, it will act like a big hill, with a little lump on it.

Suppose that our bumpy neutron star is also spinning. We know that the Earth spins — that's why the Sun seems to move across the sky. Astronomers have seen that the other planets rotate similarly. Even the Sun itself rotates. We should expect that distant stars also rotate. As these stars die, their rotation doesn't just stop. Instead, like an ice skater bringing her arms in as she twirls, the collapsing star will spin faster and faster. Once the star is squeezed down to the size of a neutron star, it will spin incredibly quickly. 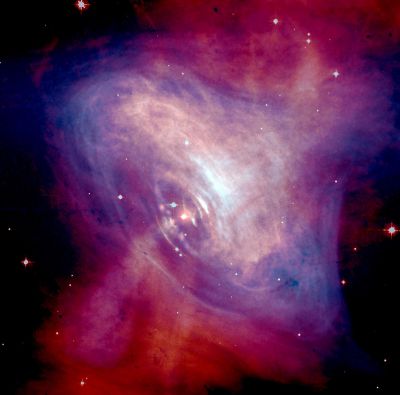 In 1967, the astronomer Jocelyn Bell was looking at data she had been taking at a radio telescope when she noticed an unusual, steady pattern. Dr. Bell had discovered the first known pulsar (Pulsar: A neutron star with a very high rate of spin, and very intense magnetic fields. The pulsar gives off beams of radiation along its magnetic poles. If these poles are not aligned with the spin poles, the beam will sweep around like the beam of a lighthouse. )}). A pulsar is just a neutron star that shoots out a beam of particles and light. When the star rotates, its beam rotates with it, like a tremendous lighthouse. It may happen that the beam from this lighthouse sweeps across the Earth, where humans see the signal as a flash from outer space. Some pulsars flash hundreds of times per second. That means that the entire star is spinning around hundreds of times per second.

Now, if such a pulsar happens to also have a mountain on it, spacetime (Spacetime: A concept in physics which merges our usual notion of space with our usual notion of time.) will get stirred up. Like a paddle spinning in water, that pulsar will give off gravitational waves (Gravitational Wave: A gravitational disturbance that travels through space like a wave. This type of wave is analogous to an Electromagnetic Wave. Gravitational waves are given off by most movements of anything with mass. Usually, however, they are quite difficult to detect. Physicists are currently working hard to directly detect gravitational waves. Experiments like LIGO and LISA are designed for this purpose. ). The spinning should be pretty constant, so we would expect the sound of its gravitational waves to be a very steady tone — one single, constant note carried off through space and time.

Listen to the steady tone of a pulsar, spinning almost endlessly in space