The reasons we work in Numerical Relativity

The Golden Age of General Relativity

In 1915 Einstein predicted that spacetime can be warped: the flow of time slows near a massive body (a planet, star, or black hole); the circumference of a massive body is smaller than π times its diameter; and as it spins, a massive body drags the nearby space into a tornado-like whirl.

Einstein's predictions were almost solely of academic interest until 1975, when human technology became sophisticated enough to test them with high precision. Since then, many experiments and observations have verified the warping of spacetime in our solar system and in binary pulsars, to high accuracy. 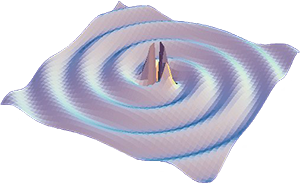 Just as human technology was inadequate for precision tests of relativity until about 1975, so our theoretical tools were inadequate for deducing general relativity s predictions — with a few exceptions — until about 1965. From 1965 into the 1980s, Stephen Hawking, Roger Penrose, Kip Thorne, and others used new theory tools to generate a golden age of relativity research — a revolution in our understanding of warped spacetime. Among their discoveries were these:

This astonishing period of progress ended, however, in the 1980s. Theoretical research in Relativity hit a brick wall, as theoretical tools neared the limits of their capabilities. Progress in understanding relativity's predictions was slowing to a crawl, while physicists were convinced that they had only begun to plumb Einstein's theory. They had discovered the nature of black holes, and had seen how those holes behave when slightly disturbed, but their tools were too weak to probe the wildly nonlinear oscillations of warped spacetime triggered by colliding black holes. This scenario of two black holes colliding has proven to be an extremely interesting problem, as well as an overwhelmingly difficult one.

Imagine a pair of black holes alone in space. As each one spins, it drags the spacetime around it into a tornado-like whirl. As the pair orbit around each other, the holes' orbital angular momentum creates a third, larger whirl. What happens when two tornadoes, embedded in a third larger tornado, come crashing together and the tornadoes are made from whirling space, not whirling air? We have almost no idea. It is as though we had briefly glimpsed the surface of the ocean on a calm day (an analog to a quiescent or weakly vibrating black hole), but we had never seen the stormy sea, nor breaking ocean waves, nor water spouts.

Physicists wondered what other kinds of phenomena can be produced by warped spacetime, besides quiescent and weakly vibrating black holes. How does the singularity inside a black hole behave when the hole is newborn, with its space and time stormy? Can there exist naked singularities, unclothed by horizons, opened up for the universe to see? What other huge surprises lurk in Einstein's equations, yet to be discovered? The answers will transform our understanding of space and time in remarkable ways.

Physicists have begun to take a two-pronged approach to the difficulties presented by In the late 1970s, as the brick wall began looming up before them, physicists became convinced that they can unlock Einstein's remaining mysteries by a new, two-pronged attack. The first prong is theoretical: the numerical solution of Einstein's equations using supercomputers (Numerical Relativity), leading to simulations of warped spacetime that reach into the rich domains that our previous tools could not touch. The second prong is experimental: observational studies of gravitational waves from colliding black holes and other phenomena where spacetime is highly warped the 'warped side of our universe'. They also realized that the two prongs were complementary and must work together:

In the late 1970s, gravitational-wave detection seemed a greater challenge than numerical relativity, so scientists initiated a wave-detection program. Their efforts have given rise to the Laser Interferometer Gravitational Wave Observatory (LIGO), and its lower-frequency, space-based cousin, the NASA-ESA Laser Interferometer Space Antenna (LISA). LIGO is now operating near its design sensitivity and could detect waves from black holes this year. NSF has recently approved funding to upgrade the LIGO detectors near the end of this decade, bringing us to a sensitivity where we are confident of seeing a large number and wide variety of waves. LISA will be launched a few years after the LIGO upgrade. Scientists are now contemplating the follow-on to LISA.

Much to the dismay of the physicists who originally laid out the groundwork for these investigations, numerical relativity has matured more slowly than gravitational wave detection. It is a far more difficult enterprise than they had thought in the 1970s, and the resources devoted to it have been woefully inadequate. The goal of the SXS project is to correct this problem, and to open the door to the new and exciting physics encoded in gravitational waves.

One who asks is a fool for five minutes; One who does not ask remains a fool forever.