Pairs of Stars Locked in a Mad, Whirling Dance

Spinning Neutron Stars and rippling Black Holes will stir up spacetime and give off gravitational waves very effectively. The more stirring, the better, though. The bigger the lump is, and the faster it moves, the stronger the waves given off will be. There is another, much simpler and more effective way of producing a big "lump" moving quickly.

Everywhere in space, astrophysicists expect to find all types of compact binary — binaries being pairs of stars; compact meaning that the stars are White Dwarfs, Neutron Stars, or Black Holes. Pairs of compact stars orbiting each other closely in this way will be like two enormous lumps moving very quickly. They can be in any combination: a Neutron Star with a Black Hole; a Black Hole with another Black Hole; a White Dwarf with a Neutron Star; etc. Because these stars are compact, and have very intense gravity, they can stir up spacetime very well.

If the Earth were to come too close to a compact star, the same forces that give us tides on the ocean would become so strong that the Earth would be torn to pieces. The same is true—even more so—for other stars like our Sun. They are simply too soft to get very close to a compact star and stay together. Instead, all of their matter would be smeared out around the compact star. Gravitational waves would still be given off, but they would also be "smeared out," and hard to observe.

Thus, the most effective generators of gravitational waves are pairs of compact stars, which can't be ripped apart very easily. Instead, they will be able to come very close to each other and stay intact. To resist the intense pull of gravity, they will need to orbit very quickly so that centrifugal force can hold them apart. In fact, a pair of neutron stars — heavier than our Sun — would be expected to orbit each other dozens or even hundreds of times per second at their closest point! This sort of extreme stirring of spacetime would certainly produce very intense gravitational waves.

A compact binary would form as a result of the chance encounter of two compact stars. They might be moving in different directions, and happen to pass very close, causing them to give off gravitational waves and — along with the waves — energy. After losing this energy, each star would be unable to escape the other's gravity, and they would start to orbit each other. 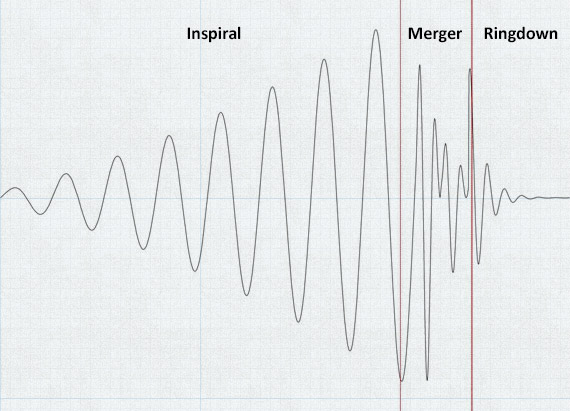 As the stars circle each other, they continue to give off gravitational waves, gradually coming closer and closer, moving faster and faster. This part of the encounter is called the inspiral. The amplitude and frequency of the gravitational waves will increase (the waves will become larger, and more frequent), until the stars are nearly touching each other. At this point, a messy merger of the two objects will take place. Finally, the combined object will go on rotating, giving off quickly-dying gravitational waves in the ringdown portion.

Physicists know that these pairs of stars exist. In fact, one such binary has even been used to demonstrate the existence of gravitational waves. In 1993, Russell Hulse and Joseph Taylor won the Nobel Prize in Physics for this demonstration. They used observations of a binary consisting of a Pulsar, with some dense companion star. The pulsar's precisely-timed flashes came slightly earlier or later than they would otherwise, depending on which way the pulsar was moving in its dance with the other star. The timing of this variation gives a direct measurement of the timing of the orbit. Hulse and Taylor showed that the orbit took less and less time with each pass — in exactly the way predicted by General Relativity — as the binary gave off energy in the form of gravitational waves in the slow Inspiral portion of the stars' encounter.