Stars are part of a complex, balanced cycle of birth, death, and rebirth. A young generation of stars condenses from the gas thrown off by its parent generation. These burn for millions, sometimes billions of years, going through various life stages depending on their composition and mass. In their final stage they disperse most of their matter into space through supernovae, strong winds, or violent pulsations. The next generation of stars forms from this recycled gas.

But in each successive generation, some stars end as neutron stars, each one as heavy as our solar system (that includes you, Pluto!), but compressed into a sphere the size of a large city. The matter locked in a neutron star does not contribute to the next generation. A neutron star never collapses, it never explodes. It doesn't burn anything, it just gets colder and colder. It is one of the few terminal graveyards for stellar matter.

Well, Not Neutron Stars in Binaries

But in fact, some neutron stars, after sitting dormant for a billion years, go through a spectacular, though brief, resurrection. Neutron stars in close binaries with black holes eventually merge with their companions, spewing exotic matter back into space and flashing brilliantly for less than a second, before falling into their companion black hole. To understand this process, the merger of a neutron star and a black hole, let's follow the life of one imaginary representative binary.

Our star system is born when a collapsing cloud of gas, recycled from the previous generation, fragments into two distinct young stars. This is a very common formation scenario. Well over half of the the stars in the night sky compose multiple-star systems. This imaginary binary comprises two very heavy stars: one is 30 times, and the other is 15 times as massive as the Sun. Because they're so heavy, their nuclear-burning cores are compressed more tightly than the Sun's, making them burn hotter, and expending their fuel much faster.

Their orbital separation is similar to the distance between Mercury and the Sun. They orbit this way for 10 million years, until they run out of fuel. The heaviest goes first, its core collapses to a black hole as its outer shell explodes, driving off more than half the star. What's left is a black hole of 10 solar masses, but small enough to fit inside of Luxembourg. Soon (maybe a million years later) its lighter companion explodes in a much more energetic supernova, flinging off all but about one solar mass of matter. What remains from this second explosion forms into a neutron star, about the same diameter as the black hole. This second explosion serendipitously pushes the pair of stars closer together, so close that they now orbit several times every day, with a separation about 10 times that of the Earth and Moon. They orbit much faster than the Earth and Moon because their masses are so much greater.

Next comes a long, uneventful inspiral. With masses this large, moving this fast, the curvature of spacetime actually ripples in sympathy. The binary begins to lose orbital energy this way, and the NS gets closer to the BH, at a rate of 5 mm per orbit. It's a long wait until they make contact, much longer than the lifetimes of their progenitor stars. The orbits get faster and faster, though, and more and more energetic. After a billion years they are so close, they could fit onto Africa. They orbit 5 times every second. In another 10 minutes they could easily fit inside Lake Victoria, and they are orbiting more than 100 times per second. They are just about to merge. 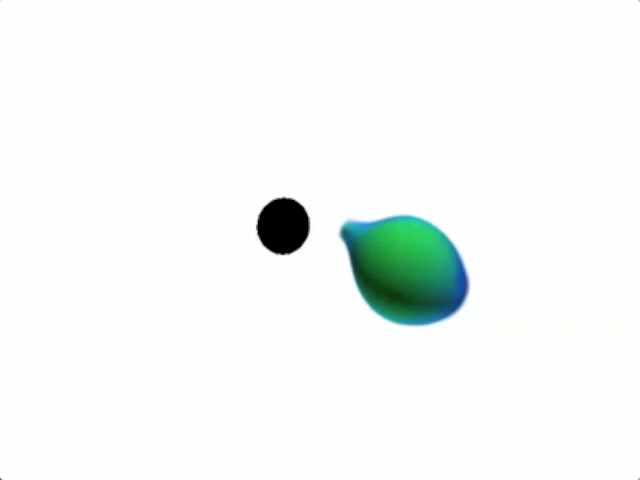 At this distance, the neutron star begins to distort, as seen in the image. Because it is now so close to the black hole, its left and right sides get tugged in different directions, and its sides closest and furthest from the hole get tugged with different strengths. These “tidal” forces simultaneously squeeze the star left to right like a tube of toothpaste and stretch it front to back like taffy. The star disrupts, violently, and a portion of its trailing edge shoots out and away from the black hole, as seen in the next image. 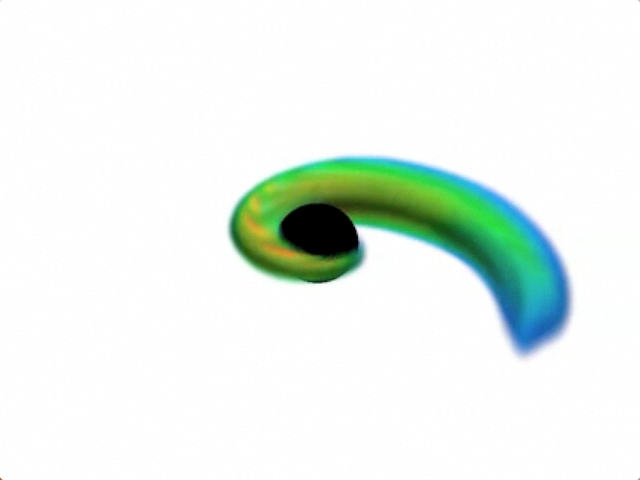 The erupting action is so powerful that some of the matter, maybe 1/10 of the mass of the Sun, flies off into space, as an expanding tail, never to return. It is liberated from what had seemed like permanent captivity in the NS, and becomes part of the next generation of stars. And this matter is unique. Having just come from the neutron star, it is extremely neutron-rich. As it flies off it decompresses and cools, and like a glass of water in the freezer, little crystals begin to condense out of it. These are rare heavy nuclei, with far too many neutrons to be stable. In the same way that Uranium-235 decays through a chain of 10 or so unstable elements to Lead-207, these rare, heavy nuclei decay to more stable nuclei through a cascade of reactions. This neutron-rich cascade produces a unique spectrum of elements. When this matter is “recycled”, it will contribute rare elements that are hard to make in normal stellar evolution. For example, most of the Holmium and Europium, which we find in relative abundance on Earth, were likely made in this manner.

Additionally, the decay from unstable to stable nuclei heats up the tail like a nuclear reactor. About a day after the merger, once the tail has expanded to the distance of Pluto from our Sun, it heats up so much that it begins to shine, like a dim star. This is called a kilonova, and it lasts for about a week before the material cools back down and goes dark.

But let's return back in time and space to the black hole, right after the star disrupts. What happens to the rest of the matter? Much of it falls into the black hole. But some of it whips around the black hole in a tight swirling orbit, and slams back into itself. This material, much denser than lead, much heavier than the earth, slamming into itself at very nearly the speed of light, heats up due to the incredible shock. It swirls around the black hole and forms a bagel-shaped accretion disk, as seen in the figure below. As it swirls and shocks, the fluid goes from a negligible temperature to almost 100 billion degrees. This temperature increase takes only 10 ms! Over the next second this hot accretion disk swirls many hundreds of times, losing matter to the black hole until the disk is gone. 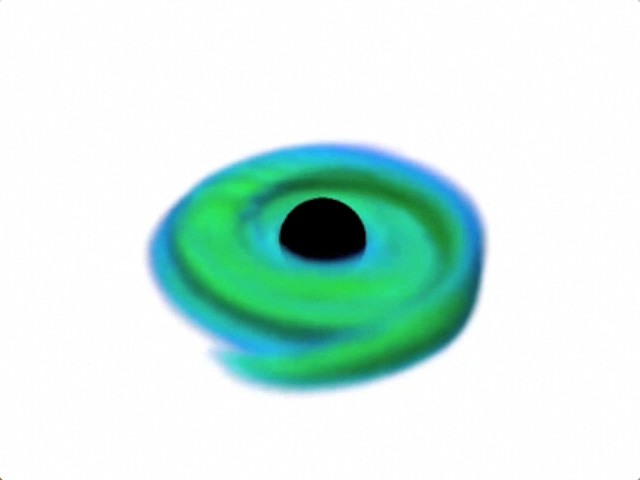 The process of accretion is very important for the final stage of the black hole–neutron star merger. As the disk swirls around the black hole it drains into it, like a reservoir of water drains through its dam. And like a hydroelectric dam, the faster the fluid flows, the more energy it generates. In the case of the black hole–accretion disk system, the generated energy is thermal, the fluid gets really hot as it falls into the black hole. This 100 billion degree fluid radiates as if it were a star, only it is much more luminous than a star. And there's one other big difference. The accretion disk is extremely dense, still much more dense than lead. This keeps photons from escaping. So unlike a star, which radiates photons, visible to the human eye, the accretion disk shines predominantly with neutrinos, exotic particles that can escape, but which we can't see.

Neutrinos are extremely lightweight particles, so lightweight they're always kicked at high speed (the speed of light, actually) from the particle interactions in which they're generated. If you slam cannon balls and golf balls together, the golf balls always come out fast; it's the same with neutrinos. They're also weakly interacting. “Weak” here means both “they interact through the weak force (one of the four fundamental forces in the Standard Model)” and “they barely interact at all” (which is partly why the weak force got its name). Neutrinos are so weakly interacting that they can fly through a light year of lead and never touch an atom of it. They're formed in overwhelming quantities in hot neutron-rich matter, which is exactly what our accretion disk is composed of! Because they can escape, and photons cannot, neutrinos rather than photons are the important radiating particle in black hole–neutron star mergers.

From the moment our NS disrupts to when the last bit of the accretion disk falls down the black hole, less than a second passes. During this second, the extremely bright neutrino emission may be powerful enough to create a gamma ray burst.