The Disputed Center of the Universe

The Disputed Center of the Universe

An Ancient Struggle over the Place of the Earth

Occasionally, in trying to understand something, we can be our own worst enemy. We may start off tackling the issue in what seems to be the most obvious or natural way, but end up leading ourselves down a difficult path. No matter how hard we try, we just can't seem to figure it out. Backing up, and changing perspectives may make the problem almost trivial. This is just what happened when humans first tried to understand the motion of the Sun, Moon, and planets across the sky. 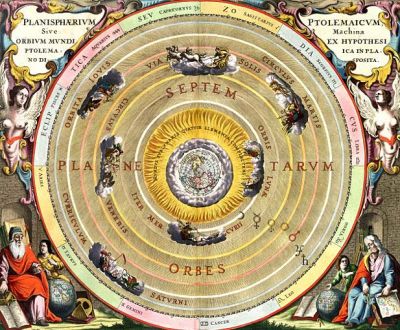 When the Greek astronomer Ptolemy approached this issue, he believed that the Earth ought to hold a privileged place in the cosmos, so he put it at the center of his system, and had the heavenly bodies move basically on circles centered on the Earth. Unfortunately, this didn't even come close to accounting for the actual observed motions, so Ptolemy added epicycles. An epicycle is a second circle with its center moving along the main circle. These strange orbits turned out to describe the motion of the Sun, Moon, and planets fairly well.

Nearly a millennium and a half later, the Polish astronomer Copernicus came along and realized that there is nothing quite so special about the Earth. He decided to put the Sun at the center of the system Ptolemy had started. When he did this, he found that the system was much easier to describe. The Sun simply stays where it is, and the planets — including Earth — revolve around it. The Moon, of course, revolved around the Earth, but everything else he know about revolved around the Sun. The problem of retrograde motion was instantly explained. The circles were later stretched slightly into ellipses, which eliminated epicycles and gave a highly accurate description of motions around the Sun. By changing his perspective a little, Copernicus made the problem became much easier to deal with. 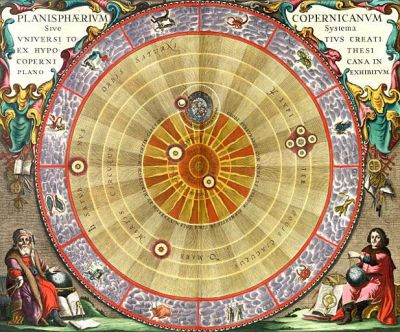 Interestingly, we now know that it is possible to describe the motion of everything in the Solar System almost perfectly by using a slightly modified version of Ptolemy's system. If we change the circles to ellipses, let the ellipses rotate, and let the planets change speed, we again have a description of how the Solar System works which is as accurate as Copernicus's model. The only problem is that this is a very complicated system — one with which neither Ptolemy nor even Copernicus was ready to work.

Fundamentally, though, it doesn't matter if we find the Earth-centered system complicated; it still works. The fact that it is hard to use doesn't make it wrong. We could even go so far as to say that, in this sense, the planets do revolve around the Earth, and not the Sun! Of course, we immediately realize that any statement like this, whether Earth-centered or Sun-centered, is irrelevant. Deciding which bodies revolve around which is just a matter of viewpoint. From the Sun's viewpoint, everything is revolving around it. From the our viewpoint on the Earth, we might as well say that everything is revolving around us.

The crucial point is that Nature doesn't care what viewpoint we take; it just goes on revolving like it always has. This problem caused — and continues to cause — great confusion among physicists. Einstein's great insight was to realize that it's all relative. Literally!

Developing this line of thought, Einstein saw that he should write down laws of physics that were independent of which perspective a physicist takes, because these are the laws that Nature would obey. He went further, however. The change of perspective in this solar system problem is just a change in position. Einstein realized that there is another type of viewpoint that should be treated equally.