The Birth of the Universe; The Most Violent Explosion Ever

Time writes no wrinkle
on thine azure brow,
Such as creation's dawn
beheld, thou rollest now.

In 1917, Einstein tried to apply his equations of general relativity to the Universe. It turned out that almost every model Universe he tried predicted that the Universe was either expanding or contracting. Einstein was convinced that this could not be the case, and that the Universe must be static. The only way to fix the problem was to add a new term to his equations, which he called the "Cosmological Constant". Later in life, he would call this new term the greatest blunder of his life. By including it, he missed the opportunity to make one of the greatest predictions in the history of science.

A little over a decade later, the American astronomer Edwin Hubble astonished the world in making the spectacular discovery that Einstein had failed to predict. After years of careful observations, he declared that the Universe was not static. He had measured the speeds at which stars were moving relative to the Earth, and found that most stars are moving away from us. This is true of stars in every direction, so the movement is not just the result of the Earth moving among fixed stars. What's more, the Earth is not special in this way. Go to any place in the Universe, and you will see stars moving away. Hubble's startling conclusion: The Universe is — quite simply — expanding!

But now, if we trace this expansion backwards in time, we realize that everything — all the matter, and light, and everything else in the Universe — must have been very closely packed together at some point in the past. In fact, there is no reason to stop tracing backwards. At some point in time, the Universe must have all been concentrated in one vanishingly small point, and exploded out. This explosion is called the Big Bang. 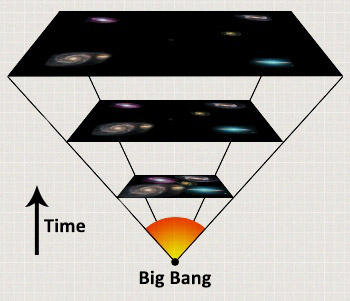 In fact, a solution of Einstein's equations which matched Hubble's observations had been found several years before Hubble made his announcement. It came complete with a Big Bang at the beginning. Just after its discovery, very few scientists believed that it described the real Universe. Most (including Einstein) believed in a constant, unchanging Universe until Hubble provided the necessary evidence. Today, astrophysicists still use a slight variant of this early model to figure out how the Universe acted in its earliest years. They infer how matter formed, how stars and planets and galaxies developed, and how the Universe at large evolved from its tumultuous beginnings.

Because some of the stars Hubble saw were so far away, the light coming from them had to leave the stars long ago. So long ago, in fact, that the light must have left at a time fairly close to the beginning of the Universe. Astronomers have since found many types of signals coming from the early Universe, allowing them to peer into the past. They use these signals to confirm or revise the astrophysicists' theories. The Big Bang is now one of the fundamental concepts used in the study of the cosmos. Studying our past tests our understanding of physics past, present, and future. Reaching farther back tests our understanding in more extreme situations, when the matter was denser and more energetic.

Two major problems in the details of the classic Big Bang model developed as astronomers made more careful measurements of space. The first of these is the flatness problem. If the Big Bang did not set matter and energy expanding quickly enough, gravity may be able to pull the Universe back in on itself in a final Big Crunch. Alternatively, the Universe could keep expanding forever. In trying to measure which of these possibilities the Universe will choose, astronomers found that it seemed to be very precisely balanced between the two — not clearly favoring either possibility. In fact, a Universe that acts much different from this would either collapse far too quickly for life to form, or would not contain any stars or planets for life to form on. In the original Big Bang model, this so-called "flatness" would be a bizarre coincidence. The mission of science is a search for causes. Being scientists, astrophysicists chose to reject the coincidence explanation and search for a cause for the Universe's flatness.

The second problem of the original Big Bang model was more serious, as it actually made a prediction which has been ruled out by observation. Basically, the Universe is far less lumpy than we would expect. In the very beginning, immediately after the Big Bang, the tiny Universe should have been very lumpy, with densities arranged randomly. All this randomness — according to the simple Big Bang model — shouldn't have had time to even out, so the Universe should still be that lumpy. But this is not what astronomers see when they look out at the Universe. This is called the horizon problem.

Both of these problems are solved in one stroke with the addition of a simple idea to the classic Big Bang model. The theory of inflation proposes that the Universe expanded quite slowly at first, keeping everything in close contact with everything else for a short span of time. This span of time was just long enough to let the random differences in density smooth out. The Universe then expanded very suddenly and very drastically for a brief instant. Looking at Einstein's equations for a Universe acting like this, it becomes extremely likely that the Universe will tread that fine line between expanding and collapsing. Inflation thus provides an explanation for the unusual flatness astrophysicists were so worried about, and sews up the two major holes in the old Big Bang model.

Life in the Ekpyrotic Braneworld

A more radical solution to the problems of the simple Big Bang model involves changing the very nature of the Universe in which we live - right down to the number of dimensions ins space. A controversial idea suggest that space has many more than the three standard dimensions with which we are familiar. We may simply be unable to notice the extra dimensions, or we may be trapped in our three while other dimensions stretch all around us.

We can visualize the second of these possibilities with an analogy. Imagine ants crawling along a sheet of paper floating in space. The sheet can bend and warp and move all through the space, but the ants are unable to leave the sheet. In this sense, the ants live in a two-dimensional surface, though that surface moves in three-dimensional space. In the same way, we may be trapped in our three-dimensional "sheet", though that sheet moves through a space with perhaps ten dimensions. In this case, we call our "sheet" a brane (as in membrane).

There may be two branes — with us trapped on one — and the Universe as we know it may have begun with their collision. The Big Bang would still happen on our brane but would be slightly different, solving the problems.

Though the Inflation and Ekpyrotic models differ in their details, both involve the Universe starting off in a very dense, hot condition. In both pictures, the cosmos began as a seething foam of particles and quantum fields, then cools as it expands. Just as steam turns to water as it cools, so to do the properties of quantum fields change as they cool. This change is called a phase transition.

Unlike water, there may be more than one cool phase. Different parts of the Universe might cool into different phases. When the Universe becomes cool enough, the different phases will inevitably meet. The place where they meet will contain unusually high density. That is, there will be extra mass hanging around in parts of the Universe. Astrophysicists suspect that much of this extra mass may be arranged in long, thin strings. These strings may be loops, or they may be infinite lines stretching across the Universe. They may vibrate, or snap — like a whip cracking — and give off gravitational waves.

Investigating the Beginning of the Universe with Gravitational Waves

To figure out how the Universe truly began, astrophysicists would like to be able to simply look back in time. Since light only moves at a finite speed, they can look back in time by looking very far away. To reach us today, light coming from sources very far away would have had to leave near the beginning of the Universe. Unfortunately, this method has a severe limitation. For the first several hundred thousand years of its life, the Universe was so hot that it glowed. Everything in the Universe gave off light, and scattered light. This means, for instance, that any light which was given off just a year after the Big Bang would have bounced off of something else in the mean time. That is, we can't possibly see much earlier than that glowing time.

Gravitational waves give us a way to look back much earlier than the several hundred thousand year mark. Nothing stops or scatters a gravitational wave, so it doesn't matter how hot the Universe was. There are gravitational waves ringing through the Universe today, passing by the Earth, which come from the very earliest moments after the Big Bang. If physicists can manage to detect these waves — which have grown very quiet by now — they can listen in on the earliest moments of the Universe's existence. Most importantly, by listening in, they will be able to judge if the Inflation model or the Ekpyrotic model is correct — or if another model entirely is needed.

The "white noise" of our Universe's early life