The Death Throes of Stars; The Most Violent Explosions in the Universe Today

In the 1st year of the period Chih-ho, the 5th moon, the day chi-ch'ou, a guest star appeared...

Starting July 4, 1054 A.D., the people of the world were treated to an astonishing spectacle. A new star appeared in the sky. For 23 days, it was visible even during daylight. The star gradually faded following its appearance on July 4. After a little more than a year, the event was over entirely. It could no longer be seen, even at night. Its brief glory was recorded by Chinese and Korean astronomers, as well as American Indians of the Southwest United States. The witnesses to that singular event in 1054 were seeing a Supernova. 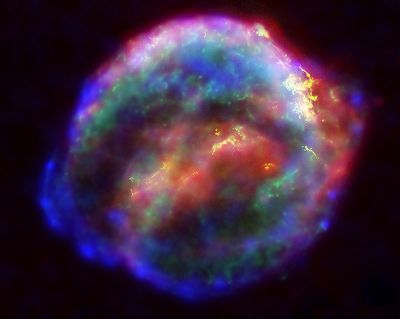 We've seen that old stars use up their fuel, cool off, and settle down into a White Dwarf, Neutron Star, or Black Hole. This usually doesn't happen very peacefully, however. The cooling is like a chair being tipped over. It is steady until it reaches the tipping point. Once it passes that point, it goes faster and faster. Soon, however, the inner layers of the star — its most dense part — will be stopped from falling by electron or neutron degeneracy pressure as the core changes into a miniature White Dwarf or Neutron Star. The falling matter from above will suddenly crash into this inner layer, and change too. The fall and crash happens in just seconds. All this sudden crashing and changing gives off enormous amounts of energy. That energy heats up the outer layers of the star and blows them out into space with fantastic speed. At its peak, a typical supernova might shine ten billion times more brightly than our Sun! Luckily, we are usually far enough away that this isn't too bright.

Carl Sagan said, "We are star stuff." He meant that we are made of matter that came from the stars. The Oxygen we breathe, the Carbon found in every cell in our bodies, the Calcium in our bones... all of this was formed in stars. Without supernovae to blow all this star stuff into the wide cosmos, however, it would all still be trapped deep inside of those stars. These most violent of explosions breathe life into the Universe.

Check out other sources of gravitational wavesRead about Numerical Relativity

One who asks is a fool for five minutes; One who does not ask remains a fool forever.