The Oldest and Coldest of Stars

Small objects (baseballs or stones, for example) don't have much gravitational pull because they are so light. Thus, they can easily hold themselves up against their own gravity with just the strength of their chemical bonds. It turns out that this is basically how planets hold themselves up, too. At the center of the Earth, for example, is a big ball of iron that pushes up with enough strength to support all of the weight of everything lying on top of it.

As objects become bigger, however, their gravity becomes too strong for their chemical bonds. If an object is big enough, and made of the right elements, it will pull on itself so hard, and crush the matter in its center so intensely that nuclear fusion reactions begin. The object quickly heats up and shines like our own Sun, as a new star. 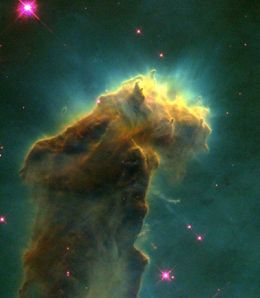 The heat from these reactions creates pressure and puffs the star up, helping it resist the tremendous gravitational pull. This is analogous to the pressure inside a balloon, which keeps the rubber balloon from contracting in on itself. Eventually, however, a star will burn all of its nuclear fuel into less useful elements that aren't very good for nuclear reactions. The star will gradually cool off as it shines away all of its energy.

Place a balloon in a freezer and the gas inside will cool. When this happens, the gas won't be able to provide as much pressure, and the balloon will shrivel up. In just the same way, a cooling star will become smaller and smaller. Eventually, the star will need something other than heat to hold itself up.

A body that was heavy enough to start fusion reactions won't likely be able to turn to chemical bonds to hold it up after it cools off — it will still be too heavy. Its first choice is to turn into a white dwarf. After burning out all of its nuclear fuel, such a star will start to contract in on itself, becoming more and more dense. At a certain point, the atoms in the star will be bunched so close together that an entirely new type of force takes over.

When the matter is pushed that hard, its electrons start to get squished together. When that happens, the exclusion principle becomes important, basically saying that no two fermions (like electrons) can be in the same place at the same time. With the help of this law, the electrons are able to push outward with enough force to resist gravity, and stop the collapse of the star. The star can then sit there happily, shining away the last of its heat as it waits out eternity.

If the white dwarf is alone like this, however, we have very little chance of seeing it from across the Universe. Fortunately, stars typically form from vast clouds of dust and gas, and more than one star will usually form in these clouds. That means that any given white dwarf has a decent chance of running into a neighbor at some point. If this neighbor comes close enough, the white dwarf can start to pull away some of the neighbor's matter. That matter will fall to the white dwarf's surface.

Now, white dwarfs typically range from about half the weight of our Sun up to 1.4 times as heavy. They are squeezed into a space the size of the Earth, which makes them about a thousand times more dense than lead! The gravity on their surface is a half-million times stronger than the gravity we feel on Earth. Any matter pulled from a neighbor will fall so fast and hit the white dwarf's surface so hard that it will heat up and glow intensely. This glow comes out in the form of X-rays, like at the dentist's office. Astronomers looking for white dwarfs can simply look for pairs of stars where one star is glowing brightly with X-rays. 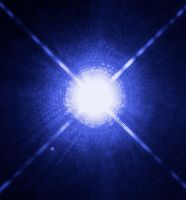 It so happens that the brightest star in the night sky has a white dwarf right next to it. To the naked eye, the star Sirius stands out brilliantly. Looking very carefully with a telescope, it is possible to see a second, tiny little star right next to it. In the picture to the left, we see this pair of stars. The one that appears larger in the picture is Sirius, which is far brighter than its neighbor Sirius B, when seen with “visible” light. 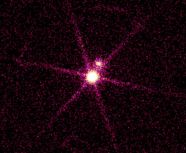 Astronomers can look at the same pair of stars with an X-ray telescope — which “sees” X-rays, rather than the light we see. With this view (seen to the right), the second little star shines much more brightly than its bigger neighbor. Astrophysicists can make careful measurements of the light coming from each of these stars, to determine what kind of stars they are. Having done so, the scientists have concluded that Sirius is just a regular star, while Sirius B is a white dwarf. 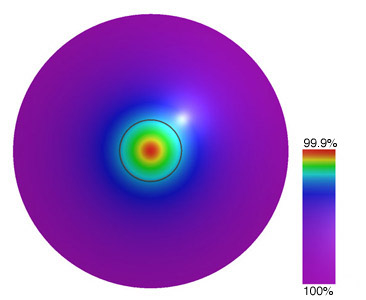 Knowing that these objects exist, we need to understand the shape of spacetime around them. The curvature of space isn't very extreme around a white dwarf; circles and spheres basically follow the rules we learned in high school. The curvature of time, on the other hand, is very noticeable. As we saw above, time moves more slowly near a really massive object. We can see just how much more slowly in a white dwarf if we look at a disc that passes right through the middle of the star.

Compare how quickly time moves for someone sitting on the edge of the disc to how quickly time moves for someone buried in the middle of the star, and you will see that time in the middle only goes about 99.9% as quickly. Now, this may not seem like much, but consider this: If you were born with a twin, and that twin went to live at the center of white dwarf, by the time you were 75 years old your twin would be nearly a month younger. (On the other hand, living on a white dwarf would be really bad for your twin's health, so it's probably best to just lose the month.) By packing more mass onto the star, your twin could be younger still. Throw on too much mass, however, and the electrons holding the star up won't be able to cope. A new type of star must form.

No amount of experimentation can ever prove me right; a single experiment can prove me wrong.